LINE Skis Innovation One of the biggest things we at LINE pride ourselves on is our innovation and knack for being different. When we’re brainstorming up new ski ideas, or deep into the development process, we’re always dreaming up new ways to slide down the mountain. Our motto of keeping skiing more funner runs deep […]
Home /
Blog /
LINE Skis | Striving For Innovation

One of the biggest things we at LINE pride ourselves on is our innovation and knack for being different. When we’re brainstorming up new ski ideas, or deep into the development process, we’re always dreaming up new ways to slide down the mountain. Our motto of keeping skiing more funner runs deep throughout our core values as a ski company and lives through the innovative shapes and skis that we produce.

From the release of the Prophet, the world’s first metal laminate freeride ski. To the introduction of the Afterbang, the only ski built like a skateboard, and so much more, we have been paving the way for innovation within the ski industry since we started 25 years ago in a small garage in Burlington, Vermont.

Now, all these years later, we’re continuing to push the status quo and striving to create unique shapes and killer products. With the Swallowtail Series, Convex Collection, and the all-new Blade and Blade W, our innovation has never been more prominent, and we have no intention of slowing down. 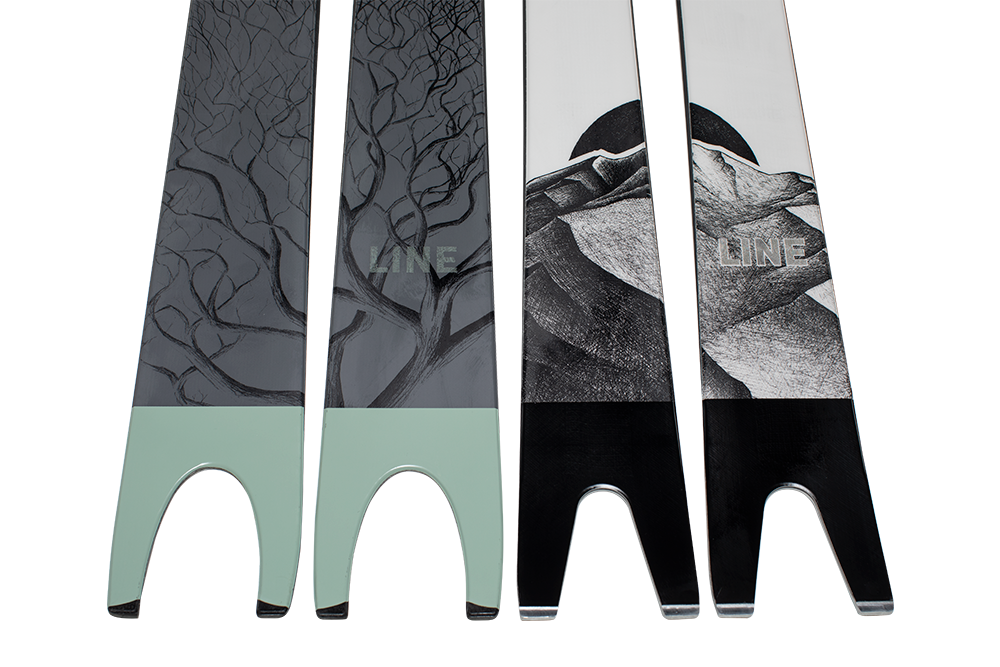 It’s no secret that skiing and surfing have some significant similarities in common, especially when it comes to skiing powder. When looking at surfboards, there are so many unique shapes and designs, so we figured, why not add some of that innovation into our skis?

The LINE Pescado was born from this ideology. Adding a swallowtail into a powder ski ultimately allows the ski to have more effective edge when you need it and less tail material to turn through the snow. Pair this with a back-mounted stance that allows the tip to rise and float through the deepest conditions, and you’ve got one of the best skis for powder on the market. 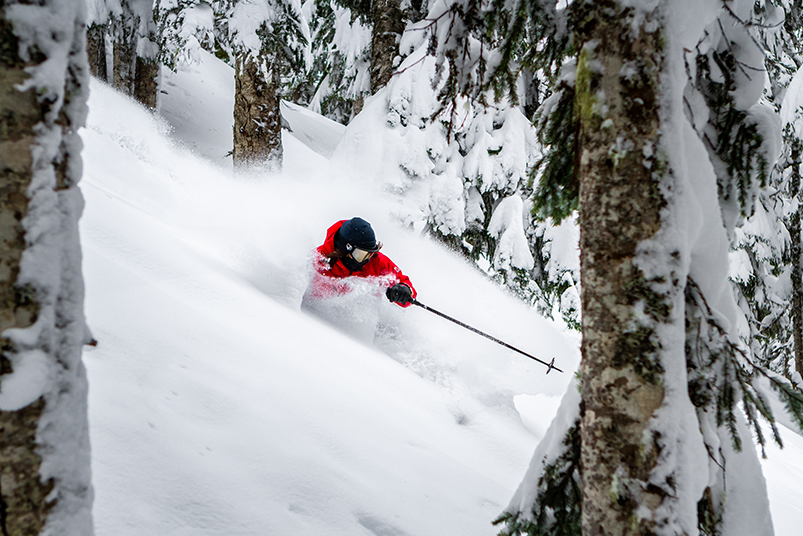 However, the Pescado doesn’t just surf through powder. For a ski that is 125mm underfoot, we found that it performed surprisingly well on groomers, and we mean really well. After digging into why this was the case, we found that with the Pescado’s back-mounted stance, paired with the ability of the swallowtail to sink into the snow, the ski had excellent grip on any snow conditions outside of powder. So, with this knowledge, we went back to work in our developmental center and came up with a narrower Pescado, which we proceeded to name the Sakana. 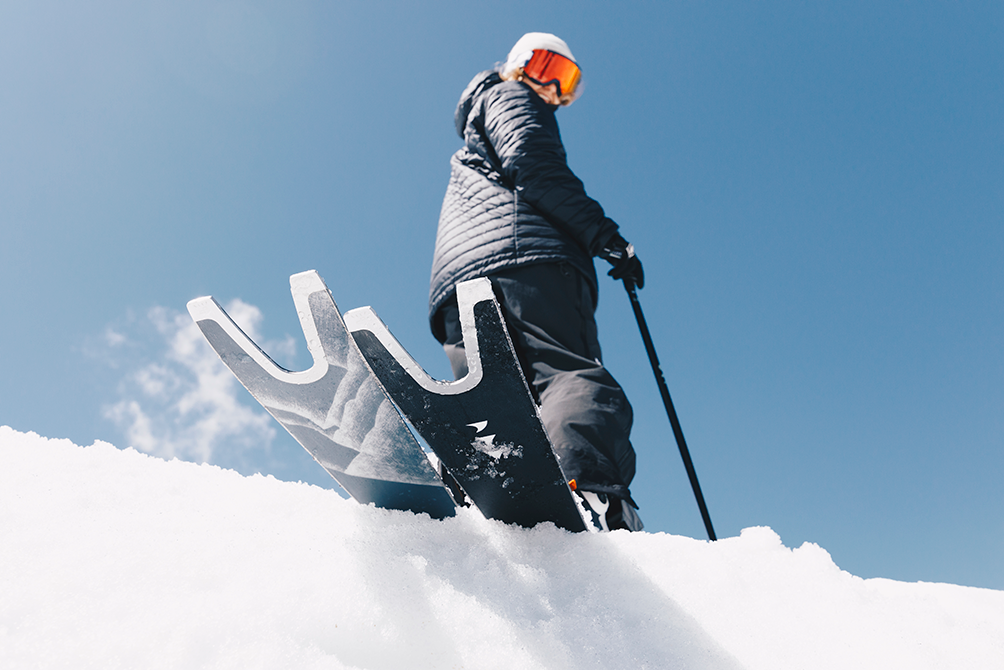 The Sakana shares the same swallowtail design as the Pescado but provides more versatility on the mountain. At 105mm underfoot, the Sakana opened the door for an all-mountain versatile ski that the industry had never seen. With the ability to float in deeper snow, but still, rip on groomers, the Sakana is the best ski for all-mountain carving, slashing, and just generally having a great time. A ski that was indeed the first of it’s kind, the Sakana catapulted skiing into a future that genuinely encourages variety and versatility. 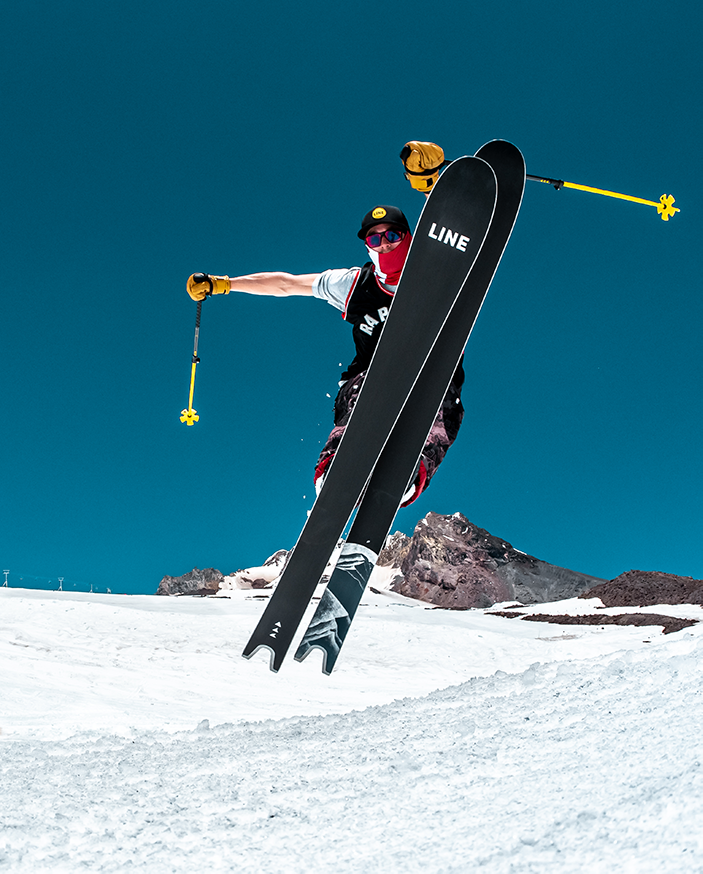 The swallowtail isn’t just for looks, that’s just an added bonus. With fewer materials in the ski, you’ll notice a lighter feel and less resistance in powder, and with an extended significant edge, you’ll feel more power and control in your turns. 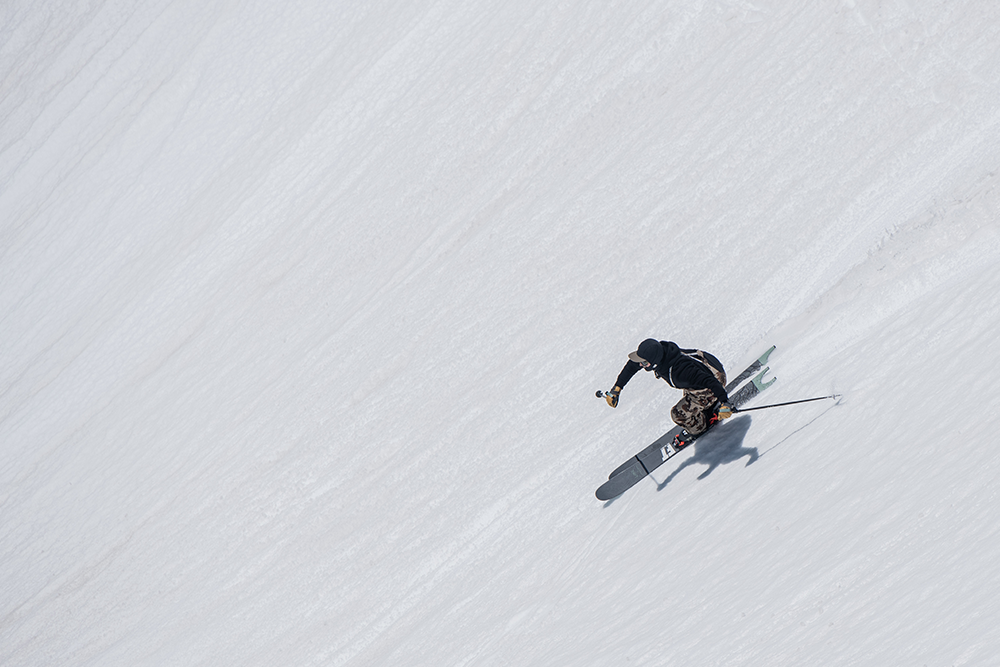 The swallowtail shape forces the tail of the ski down into the snow, thus increasing the total amount of significant edge you feel with each turn. With so much more edge, you can ski the Sakana and Pescado at shorter lengths without sacrificing performance.

On the other hand, the absence of material in the tail drastically reduces weight. In powder, the tail drops you back in the snow, lifting your tips for ample flotation while maintaining a neutral skiing stance, so you’re not in the backseat trying to stay afloat. 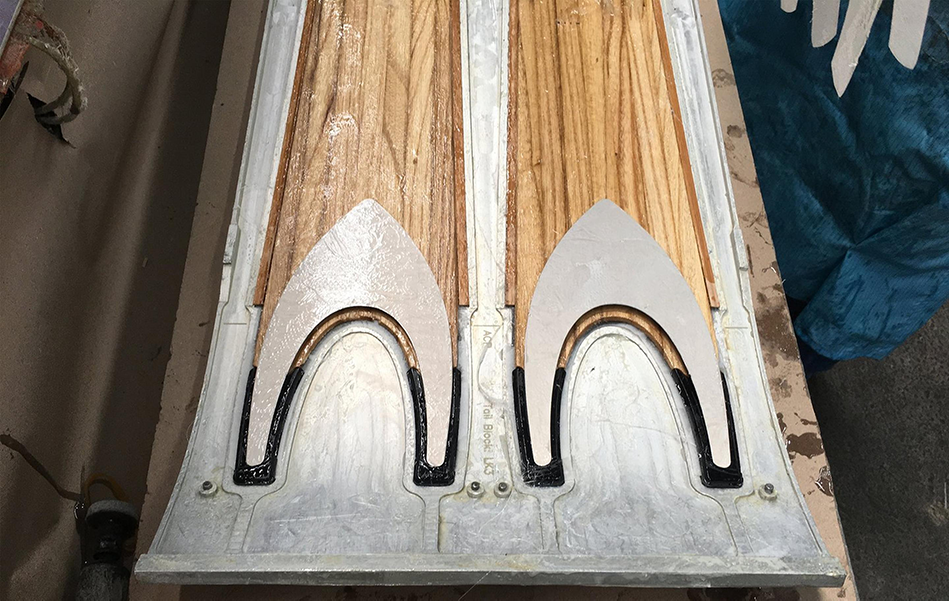 There are two full sheets of Titanal, a strong metal alloy, spread throughout the swallowtail on both the Sakana and the Pescado that create an insanely stable feel designed to help you power through carves and surf through pow. So if you’re concerned about the tail durability, don’t be!

Born out of a need to make powder skiing #morefunner, our Convex Collection with the Outline and Sir Francis Bacon open up new lanes of creativity on the mountain. 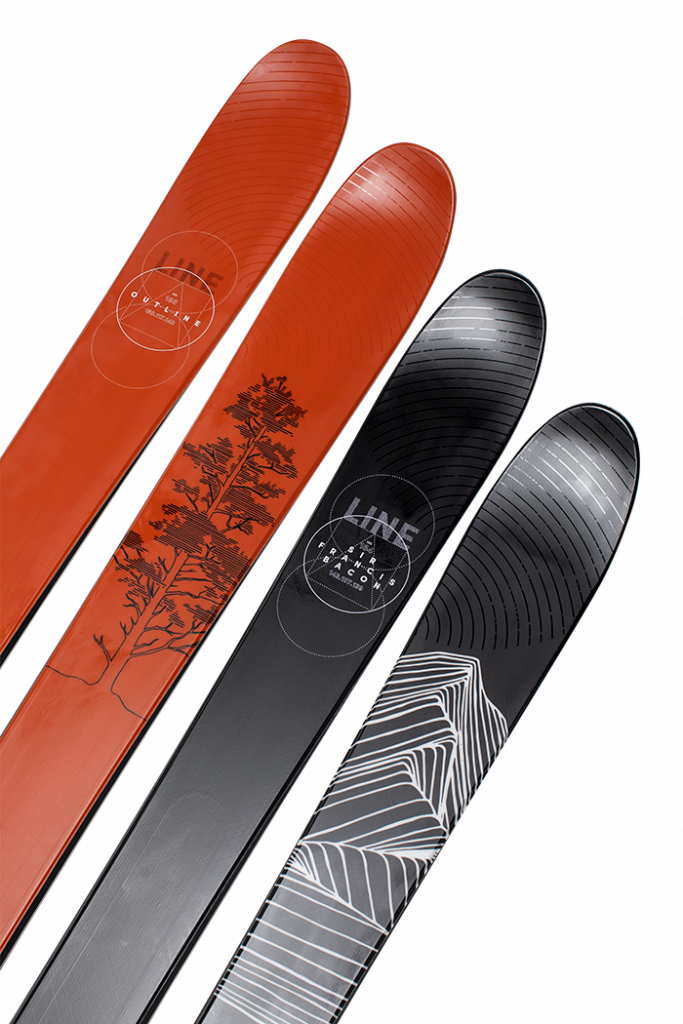 With convex contouring of the base on the tip & tail of the Outline and Sir Francis Bacon, we’re able to loosen the overall feel when the tip or tail of the ski is pressured. Similar to a surfboard, the convexity adds dimensionality to the ways in which you can pressure, feather, and stand on a ski. The result is a ski that slashes better, butters with more control improve float, and moves faster through powder. 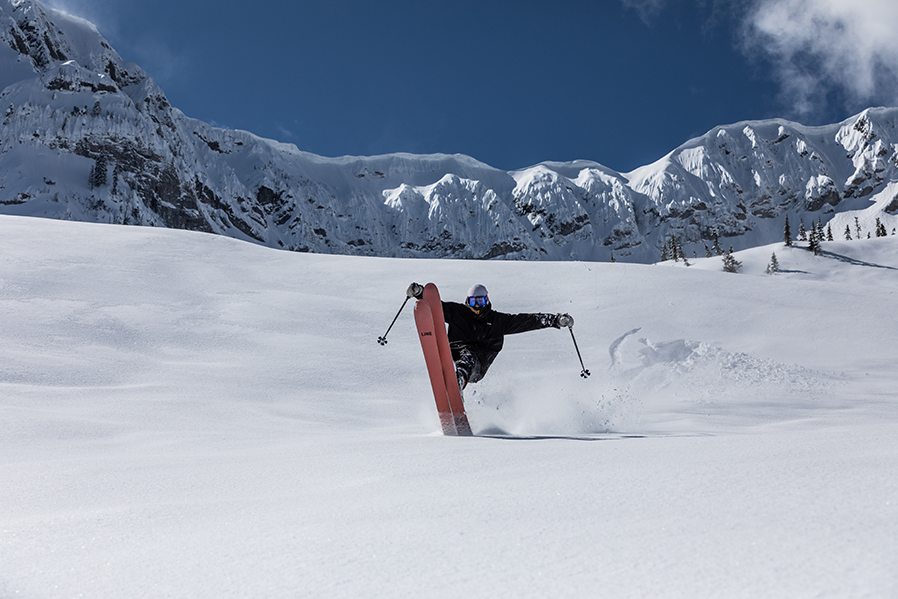 In addition to slashing, sliding, and buttering better, the Outline and Bacon both featured an extended effective edge thanks to Convex Technology. By rounding the base in the tips and tails, the widest point of both skis is extended, thus increasing the effective edge, which renders more control and stability throughout the entire ski. So now you can arch stable carving turns while railing hardpack, and when you get in the powder, the 3D Convex Tip’s & Tails keep the ski loose, so you’re not hooking up.

The next evolution in freestyle powder skiing, the LINE Outline features a Maple & Paulownia core for a great weight to strength ratio, Fatty Base & Edge for durability, original art from Eric Pollard, and 3D Convex Tech™, a curvature of the tips and tails that engages in soft snow to elevate the experience of skiing powder. The Outline opens up a new world of possibilities by creating less resistance in your turns. With a 117mm waist, get ready to float, slash, and drift like you never have before. 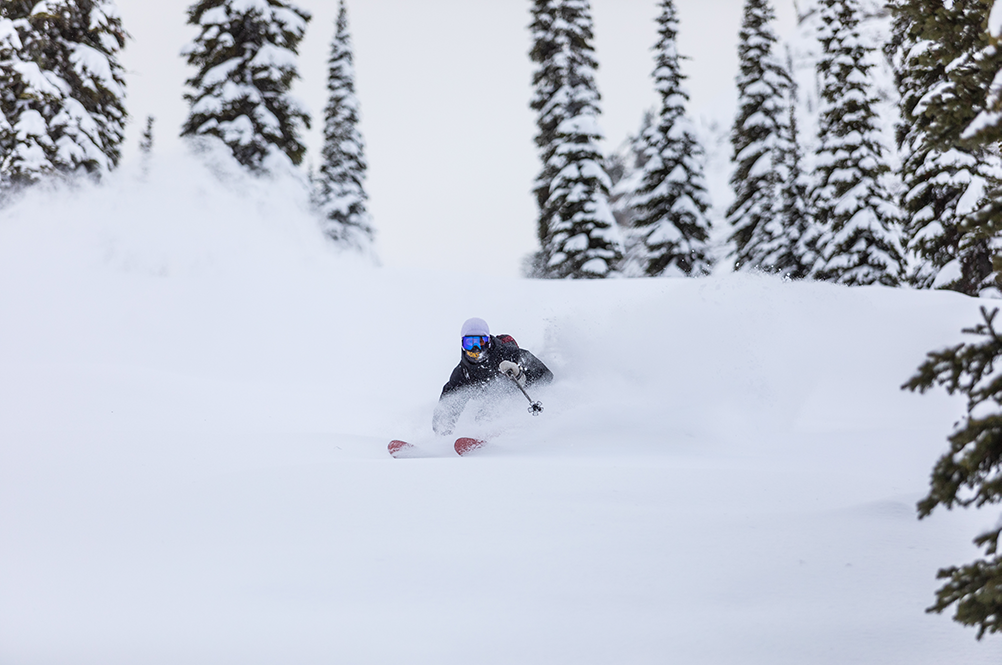 Our most popular ski, the LINE Sir Francis Bacon, is back for another season. Equipped with a versatile 107mm waist width paired with 3D Convex Tech™, it floats and butters through powder without sacrificing performance on groomers and blown out chop. Slash through wind lips, butter over rollers, and experience the playfulness that the Sir Francis Bacon has to offer.

Our newest innovation, the LINE Blade and Blade W has been called ‘the craziest skis ever made.” While that may or may not be accurate, we are definitely proud of how these all-mountain rippers came out.

The Blade is our take on a metal laminate freeride ski. It’s no secret that our roots go deep into the park and freestyle skiing scene, and those roots will never change, but as unfortunate as it is, you can’t really ski park forever. One day, you might wake up and realize you want a ski that can make the entire mountain your playground, a ski that allows you to rip down standard groomers as you’ve never done before. Instead of bending your blends all day long, you want to euro carve your way around the mountain, slash and slarve through the fresh snow that fell overnight and leave deep cut trenches in your wake. That’s where the Blade comes into play.

The dimensions of the Blade are 154-95-124, while the Blade W comes in with 140-92-114. In other words, both the Blade and the Blade W have considerable taper angles – meaning the tip width of the ski is much broader than the center and tail of the ski – this, in turn, creates a shape that allows you to slash and slide with ease, creating a playful feel behind the ski. At the same time, the large taper angle paired with large amounts of sidecut allows the Blade to have an extremely tight turning radius.

The Blade takes a lot of notes directly from the Sakana. In comparison, the Sakana’s dimensions are 150-105-138 with a 15m turning radius, and a recommended mountain point 8cm behind the center. The Sakana’s core is made up of Paulownia and Maple. The Blade, on the other hand, features dimensions of 154-95-124 with a 13.5m turning radius, and a recommended mounting point 4.5 cm back from center. In comparison, the Blade’s core features a metal laminate on top of an Aspen core for extra power and energy. Both skis are created to carve, but one cuts harder than the other, while one floats better than the other. 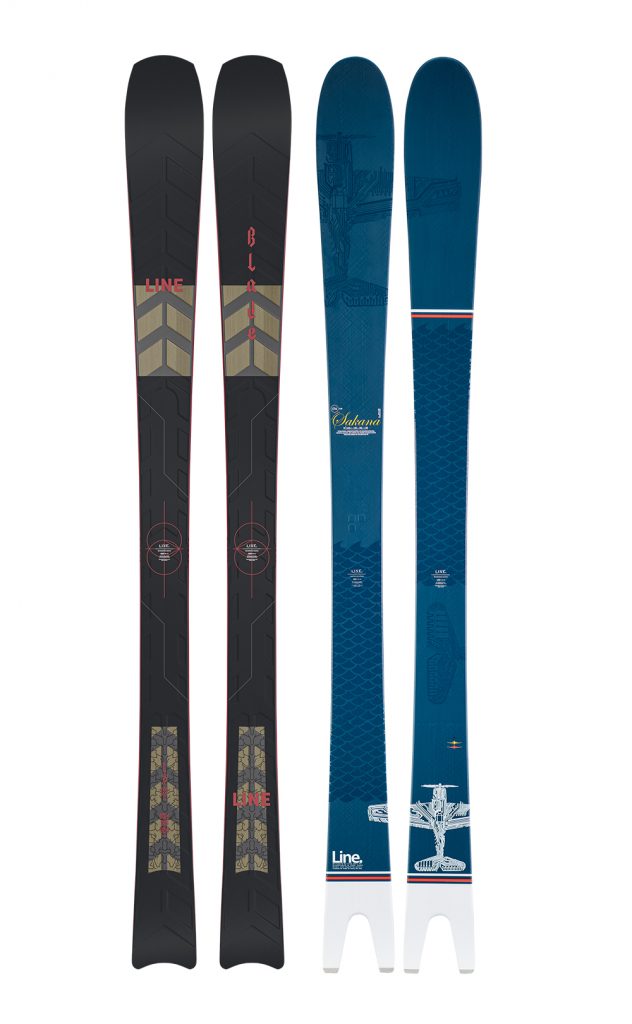 The Sakana, with its wider waist, back-mounted stance, and long significant edge, is going to perform better in deeper snow. However, put both skis on hardpack, and the Blade will blow the Sakana out of the water with its ability to carve like a butcher on Thanksgiving.

In simple terms, the Blade is a narrower, damper, more robust version of the LINE Sakana. So if you like the Sakana, chances are you’ll love the Blade.

Want to learn more about the Blade and Blade W? We’ve laid out answers to the most asked questions about the new skis right here.